In today's writing lesson, there are TWO parts. Part 1 is about reading other examples of short adventure stories and part 2 is about creating your own mind map for your own adventure story.

Miss Stray has shared some further examples of short adventure stories. Please read them to give you further ideas for your own writing.

He was darting through the lush, green jungle that could be seen creeping its way through the rocky valley as the sound of tiny, strange creatures buzzed in his ears. Sam was slowing now, pushing his way through the undergrowth as brambles caught his damp, loose clothing; branches whipped at his reddening, sweaty face; and the treasure he longed for grew closer and closer.

"I'm nearly there," he muttered to himself, "I'm so close to the ancient treasure." The island not only hid his gold, but a great, undiscovered danger. Cautiously stepping around the corner, he came face-to-face with the huge foot of a beast! Stumbling backwards in utter disbelief, he crouched behind a tree and held his breath. His mind began to race and the knot that he felt in his stomach tightened - he hadn't anticipated sharing the island with a dinosaur. Who would?

At that moment, Sam, who was beginning to panic, heard a gut-wrenching roar echo like thunder through the jungle, reverberating off every rock. He was surrounded by ferocious beasts on this plant-infested island, each of the scaly giants hunting for their next meal. He crawled along the ground as he frantically searched for a way past. "I need to be quiet," he whispered, "one snap of a twig and the giant will know where I am!"
As he hid between trees, he grew impatient, especially when he noticed some pearly eggs which were beginning to hatch! The white shell on one egg cracked down one side; the second egg shook in the corner of the nest as if something was fighting its way out; and the third egg, which had rolled and spilt in two, was revealing a slimy, tiny baby inside. Sam, who watched on in amazement, lost track of where he was and the threat that surrounded him until he saw the foot of yet another beast appear from around the corner. "Shhhh," hissed an unknown voice. Then a hand wrapped around Sam's mouth and pulled him down behind a rock. "Don't make a sound," it whispered. Jake was now crouched down staring at a small-framed girl dressed in full camouflage. Where had she come from? Sam was completely baffled but it was apparent that she knew what she was doing. The girl pointed in the direction of a cave opening and then hollered, "Run!"

Rapidly sprinting, he made his escape. Sweat dripped from every part of his body and the pain from running felt like a thousand daggers in his side yet he knew he couldn't stop. She was faster than him. If he wasn't careful, the dinosaur chasing them would be too. Fighting through undergrowth with the powerful dinosaur's breath on his back, they made it to the mouth of the cave. At that moment, the two of them stood face-to-face with the beast and smiled knowing the giant could no longer get to them. Sam slumped down on the ground in exhaustion.

"I'm Ellie," said the mysterious saviour, who had appeared from nowhere and probably saved his life. "Are you ok?" "I-I think so. Thanks to you!" Sam replied, still quiet breathless from the run. Ellie gave him a minute to recover before asking, "Why are you here boy?" "My name is Sam and I'd rather not tell you why I am here." He was desperate to keep the treasure a secret - he would rather not share. "Considering I saved your life, I think you should tell me and I could help..." Ellie said, "or I could always leave you here to fend for yourself!"
Sam weighed up his options. Although he didn't want to share, he really wanted to make it out alive. Sharing was definitely the better option. He explained about the treasure that he had been hunting for years; about the ancient maps that had led him to this island; and about the clues left by his great, late grandfather. Ellie listened on in awe - never before had she heard tales of such treasure or been aware of its existence. Together, like a pair of blood-thirsty hounds, they crept further into the darkness of the cave in hot pursuit of their treasure and ignorant to the dangers that laid beneath the surface...

“Look at that beautiful bird!” Pip exclaimed, her eyes shining in wonder, “Its feathers are all the colours of a rainbow!” Her friends gathered quickly to where Pip was pointing. A lucky group of year 6 children had won a trip to the Amazon rainforest after they had entered a writing competition at school. For two whole weeks, they would be exploring and learning about the rainforest. Pip and Freddie - who were both eleven years old – were in a permanent state of excitement; this trip was a dream come true. “Pip,” Freddie whispered under his breath, “Let’s go quickly and explore away from the others; we might find something totally awesome!”

Tiptoeing quietly away from the group, the two excited children crept cautiously towards a dense, overgrown part of the forest. In the distance, they could hear their teacher talking animatedly about the wildlife so they delved deeper into the jungle. Sticks crunched under their muddy boots; screeching monkeys and birdsong filled their ears along with the constant rasping of insects, which grew louder with every step they took.

“Freddie,” Pip hissed quietly, “I think we should turn back, we will get lost out here!”

“Nonsense!” Freddie confidently replied, “We are intrepid explorers, come on!” Freddie marched forward, head held high until ahead of them, they could see what looked like large boulders standing bravely amongst the trees. Without saying a word, the children raced excitedly towards the enormous rocks when suddenly, the ground underneath them disappeared. Before they knew it, they were falling - faster, faster, deeper and deeper into the ground… Seconds later, they both landed with a crash on to a muddy bank, dust unpleasantly filling their eyes and mouth. Coughing and spluttering, Pip - whose heart was beating like a runaway train - scrambled to her feet. “Freddie? Freddie – are you alright?” Freddie appeared from beneath a pile of leaves, eyes wide like saucers. “What just happened?” he stammered, “Where on earth are we?”

Nervously looking around, their eyes adjusted to discover that they were deep underground in a dark and musty smelling cave, with a roaring river raging through the middle. In the distance, small cracks of light started to appear so both children clambered over the slippery rocks towards it. Illuminated from the light was a small carving hanging on the wall with a dusty inscription: to free yourselves from this cave you must follow the song, you must be brave… “What on earth does that mean?” wailed Pip, “How are we ever going to get out of here?” Before Freddie could reply, a beautiful, melodic singing voice filled the deserted cave. “Listen!” hushed Freddie, “What is she saying? She will help us get out!” Straining their ears above the roar of the water, Pip’s eyes grew wide as she understood the words, “We have to follow the stepping stones IN the river,” she stammered, “All the way out!”

It soon became clear that the only way out was to follow a specific pattern over the rocks in the water in order to escape from the cave. If they took one wrong step, they would be washed away with the powerful current. “We can do this,” Freddie determinedly exclaimed, “I know it.” With that, the two children looked into the angry water (dotted with stepping-stones), took a deep breath and began the pattern from the inscription…
What felt like hours later, the exhausted children looked up to see daylight ahead; their hearts flooded in relief. Freddie leapt safely on to the grassy bank and turned to help Pip. As Pip reached out to Freddie, her other foot stepped lightly on to another rock, which triggered a catastrophic reaction - the rock she was standing on started to sink into the water! Without a second thought, Pip leapt as high as she could and collapsed, shaking like a leaf, onto the bank where Freddie stood. The two children gaped at each other, horrified, as they watched all the rocks slipping away. “Let’s get out of here!” yelled Freddie and they raced out to find their group just the other side of the entrance to the cave. “Ah, Pip it is your turn to lead the group through the rainforest,” smiled her teacher. Pip and Freddie started at each other opened mouthed – hadn’t they even noticed they had been gone all this time? This rainforest was even stranger than they had ever imagined….

Now you have read some more examples of short adventure stories, have a go at writing some ideas for your own adventure story by drawing your own mind-map. Use the Amazon picture to help with your ideas: 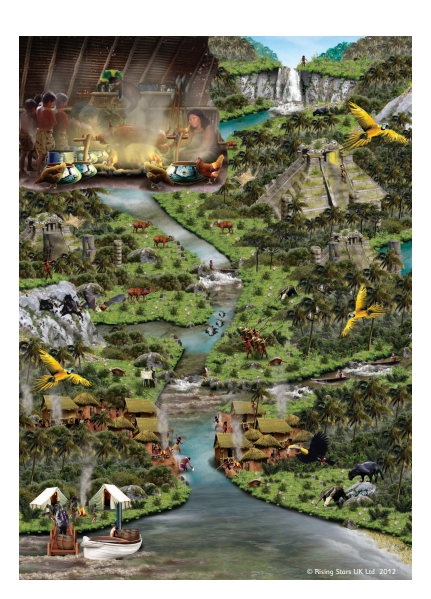 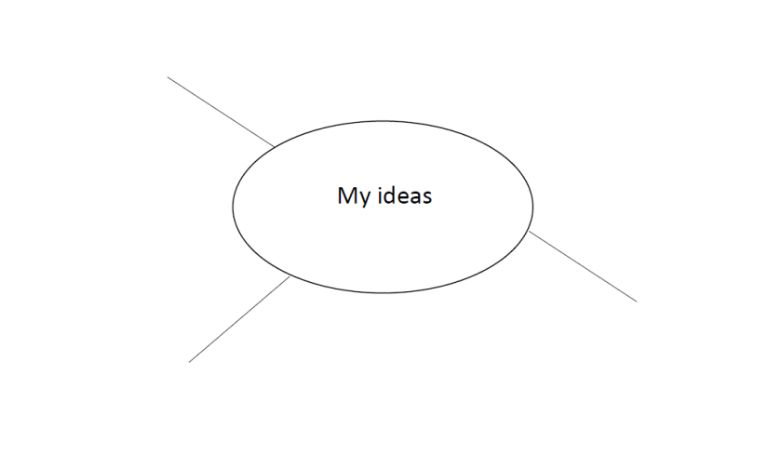 A bigger copy of the example texts, picture and mind map is attached.